Should we Build a Bigger Boat

We continue our design study for a 50-foot custom aluminium cruising boat with KM Yachtbuilders in the Netherlands who build Bestevaer and Stadship sailboats. In this session, we go over the details of a customized Bestevaer 49 and two Bestevaer 45's that KMY has built for other customers. All have features similar to the ones we're looking for and by the end we wonder if we should build a bigger boat.

Test sailing a Neel 51 Catamaran on a windy day in the Caribbean Sea off Panama. James & Eva take us out for the morning of exciting sailing to see what trimarans are all about. Back in port we get James thoughts on his boat after many thousands of sea miles.

We're building a new boat and looking into various propulsion systems including the possibility of an electric drive.
In Panama we meet the Energy Observer which is travelling around the world demonstrating the possibilities of hydrogen fuel. They are powering all ships systems, including cooking, navigation and even powering the electric motors that drive her through the water with electricity. The electricity is collected in her solar panels which cover every bit of her wide decks. The power is stored in batteries, and also in compressed hydrogen. It's the hydrogen that makes her so interesting.

Energy Observer carries 62 kilograms of hydrogen fuel in carbon fibre wound tanks. This can be run through their fuel cell to produce some 800kwh of electricity. Their solar-panel covered decks produce 31kW peak output which is stored in Lithium batteries of 100kW. And when they have surplus power from the sun they can even produce their own hydrogen to refill the tanks. Add in automatically controlled sails for additional speed. They are doing a promotional world tour showcasing this 100% self-contained no-carbon voyage.

Check out the Energy Observer homepage for more information and to follow their voyage. 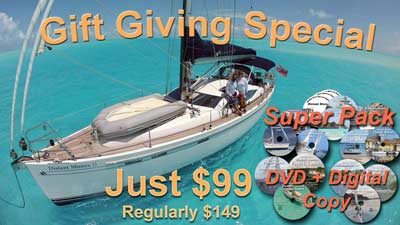